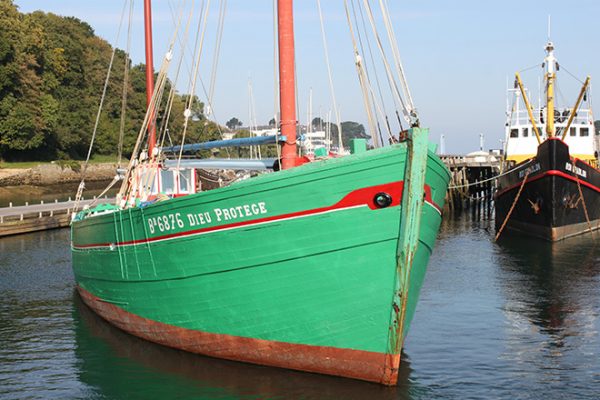 Dieu Protège is an Iroise Sea sand barge. From 1951, the year of its launch, and for 35 years, Dieu Protège extracted sand from the Iroise Sea, then delivered it to Brest. This sand was required for the many reconstruction sites in the city, which suffered substantial destruction during the Second World War.

Dieu-Protège is the strongest sand barge from Lampaul, in the Léon (North Finistère): it can carry 150 tonnes of sand in its hold. Its masts clearly emphasise that despite having an engine, this boat could still bear large sails, making it a representative of the last generation of sail-powered barges.

Its crew of 3 to 5 people, depending on the period, loaded the tonnes of sand using a grab bucket also known as the “crapaud” (the toad). Powered by a 40 hp engine, suspended from a cargo boom and released on its cable into the water, the grab bucket was hauled back up again once its jaws had closed around a good 700 dm3 of sand. Lifted to 2 metres above the deck, each grab bucket load was emptied into the hold

Your ticket for the: Dieu Protège, sand barge