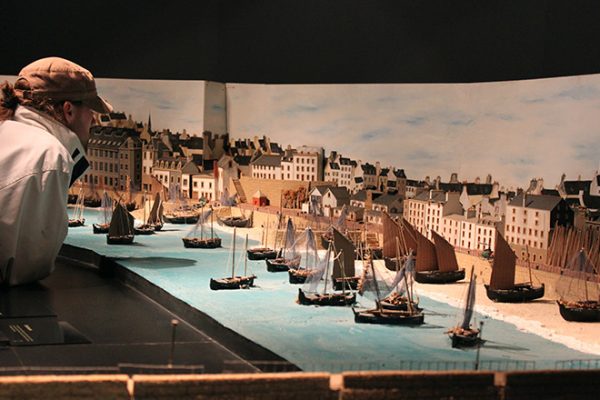 Douarnenez has a long history as an active fishing port. It was Brittany’s largest sardine fishing port in the early 20th century, with almost 800 boats: a quarter of the fleet of the whole Breton coast. With 4,560 registered seamen out of a total population of around 15,000 in 1910, the seafaring population set the rhythm for life in the town. In the 1920s, the sardine port opened to seasonal fisheries: mackerel, tuna, then langouste (rock lobster) from the 1950s. A thriving fishing port up to the late 1970s, Douarnenez has since suffered a marked decline, due to the depletion of fishing resources.

With a mixture of workplaces, factories and homes, the town and the port function as one. On land, serving the sea involves and employs a large number of people, for whom a side activity gradually became a specialist profession. For this reason, part of the Port Museum’s collection is devoted to work in sardine canneries, with objects that symbolise factory activity, archives and photographs of the workers. The permanent exhibition retraces the history of the people of Douarnenez, through boats and everyday objects, a room devoted to the golden age of canning, and a maquette of the port of Rosmeur.

Your ticket for the: Douarnenez, sardine port